What would you do if you met a guy who systematically picks up women, almost like a serial undercover womaniser? A guy who would pretend just wanting to meet new people and looking for friendship? Would you keep it for yourself or would you warn the women around you?

If you are woman, sat down by yourself in the Cinquantenaire Park in Brussels, you are likely to be approached by him. He may open the conversation making a remark about the way you are dressed, as two women remember: “Aren’t you warm in that black top on such a lovely day?” or “Where is the closest place where I could find some water? It is so hot, today!”. He seems friendly. He smiles a lot. He says he is French and that he is a life coach, wanting to help people. Especially the shy people. “What a nice guy to chat with!”, you may think, especially that minutes earlier you were sat on your own, deepened in your thoughts, maybe feeling a bit lonely or sad. He seems a good partner of conversation, paying interest to what you say, listening, asking lots of questions, one after the other. Until an unusual question pops-in. In my case it was something like: “Is your relationship with your husband open?”. 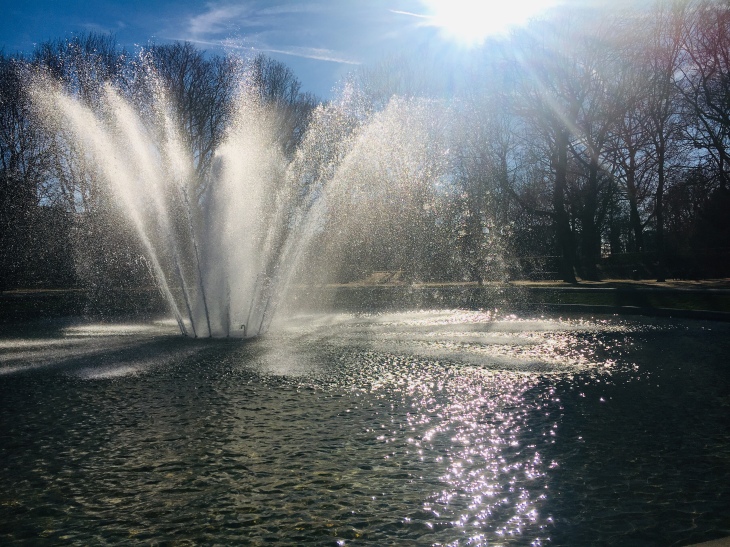 A Saturday, Park Cinquantenaire. That afternoon I was very tired and rather down. I had not been sleeping well for the entire week and the repetitive insomnias were taking their toll on me. On my way home, after a failed attempt to take part to a workshop, I decided to stop to the Cinquantenaire park. I removed my shoes, stepped on to the grass and laid down. Next to me, sat down, feet touching grass, a young woman was enjoying the urban nature as me.  “Oh, sweet youth!”, I said to myself and smiled. I closed my eyes and started feeling the sun warming my skin up. My brain was foggy and the deep tiredness that I had been trying to fight was now taking over my body. I gave in into a light power nap. Some time later, awaken by shivers, I opened my eyes. The sun had been covered by clouds. My headache seemed to have decreased but overall I was still unwell. Next to the entrance to the park, some Provence stalls were displaying various Provence products, ranging from local dishes, sweets, lavender products, leather bags or French charcuterie. A nice home-made bread with tomatoes and olives seemed a good remedy for my state. So I got up and headed to the stalls. I was just about to exit the park and head to the savouries stall when a man approached me. Medium hight, smart-casual attire, dark-haired and a big smile on his face. He was emanating openness and friendliness. In a very polite and well-spoken French, he apologised for stopping me and asked me if I would kindly tell him if I were a painter. Or maybe a dancer. Or having some creative profession. Taken by surprise, I did not know what to say. I was not sure about his intention. A stranger, asking me such a strange question, out of the blue. I answered with a question. What made him think I would be a dancer or a painter? He had his reply ready – he said he sensed that I might have had some artistic talents due to my colourful clothes. I was wearing bright red pyjama like trousers with floral pattern, a pale salmon-pink t-shirt, a short creamy smart-casual jacket, all assorted with a red scarf. My backpack was yellow and my handbag was matching my jacket. “I love colourful clothes.”, he added. He was wearing black and cream-grey. Not that much colourful to me.

I told myself not to be judgemental and I continued to listen to him. He might be actually someone nice to chat with and we may have common interests. He told me he was from Paris, living in Brussels for two years. He was a life coach and was working on a project for shy people. That’s pretty cool, I thought and continued to ask him questions about the coaching profession. But although the conversation seemed interesting, I was feeling uncomfortable. I am not sure if it was the avalanche of questions, the assumptions he was making about me, the over-the-top friendliness and attention on me or the pushy approach. Then my husband appeared. He was jogging in the park. “Ha, that’s unexpected! What a coincidence”, I thought to myself.  I presented to him my new acquaintance: ‘Stéphane‘ (name changed), the life coach from Paris. My husband said “Hi, nice to meet you. I’ll let you talk” and continued his run. ‘Stéphane’, the life coach, seemed very surprised with my husband’s appearance. “It never happened to me!…The husband, to show up. You never told me you were married!”. I smiled and replied: “You never asked”. Later on he was asking yet again another question. A very intimate question, given that I had only met him: “Are you and your husband in an exclusive relationship?”. I couldn’t believe my ears. How on earth did this conversation go from creativity, coaching, helping shy people and life in Brussels to open relationships? “Excuse me? I beg your pardon? … Our relationship is very exclusive, thank you!”, I replied.

I was shocked by his question. Then I understood. He was genuinely not interested in who I was, nor in making new friends. If at the beginning I refrained from being judgemental, now I was happily placing him in the “another man who tries to hit on me” category. We said good-bye. And I went for my Provençal savoury. Then back to the park, heading to my previous spot. And then it hit me. ‘Sthéphane‘, the guy who tried to chat me up, was now talking with the young woman who was sat next to me earlier, displaying the same smile and the same friendliness. I joined them. But to my surprise, he did not seem to care. No signs of embarrassment. He kept doing friendly and easy-going conversation, twisting his answers, throwing with questions, all in a very manipulative way. I asked him what he was looking for by approaching lone ladies in the park. He said he loved meeting and talking to new people and that all he wanted was sympathy and friendship. Then I threw my question: “That is why you asked me if my relationship with my husband was open? Out of friendship? How thoughtful!”. He replied: “I’m not perfect”.

Later on he was leaving the park annoyed. I had confronted and annoyed him as I pointed out his behaviour. Meanwhile, a friend of the young woman recognised ‘Stéphane’. He had approached her a few months ago in a very natural way, asking for information on the closest place to find water. Then he caught her into the net of a hidden hit-on conversation. She remembered him well.

To be clear here: I have no problem with men approaching women, especially if there’s a genuine interest. But I do have a problem when this becomes some kind of sports or competition. Or when the purpose it is not clear. When the man hides under “I’m only a friend” suit but actually manipulates. When the man systematically approaches ladies in a certain area, like a park. To me, this innocently looking chat, which is systematically and recurrently done with various women becomes another form of harassment.  And if this guy really works as a life coach, his behaviour is not ethical.

Otherwise, I must admit that I admired his spontaneity and his capacity to improvise “pick-up” lines that looked safe for the “victims”. I noticed as well his complete lack of shame. He simply didn’t care how he would be perceived and what others may have thought.

Now, if you are a woman alone in the Cinquantenaire park, there are quite a few chances that you are approached by ‘Sthéphane’*. Me and other ladies he hit on suspect that he does that on a regular basis. He was seen to be “chatting” again on Sunday.

For him, his behaviour has nothing wrong. He says he looks for friendship, but I think he regards friendship differently. If you got hit-on by ‘Sthephane‘, I am curious, what was his approach-line, this time? And what did he propose to you later? Would you tell other women about him?

*Disclaimer: Name has been changed in order to protect the identity of individual. I have tried to recreate events and conversations from my memories of them.

P.S.: Thanks to ‘Stéphane’, I met three great women, two of them who had a similar experience as myself. So, somehow, I need to thank him for his questionable “behaviour”. Anyway, I don’t know what drives this behaviour. I can only imagine that he previously must have been a very timid person, who overtook his social timidity by challenging and exposing himself to as many social situations as possible. And that may have degenerated a bit. I don’t know. I am not a psychologist. But I would very much appreciate it if this behaviour would stop and his social competences would trully be directed to more noble attempts.

Woman. Soul of an Artist. Writer. Wife. Dancer. Entrepreneur to be. Spirit. Light. Colour. Friend. Daughter. Sister. Thinker. Multi-potential. Multi-options. ISFP (according to the latest tests, but who knows). I write and express myself whenever my mind is bursting with thoughts and doesn’t give me peace. Read me mostly in Romanian and sometimes in English. View all posts by Gabriela D. Spencer

This site uses Akismet to reduce spam. Learn how your comment data is processed.